Honey bees have once again taken up residence in the barn.  The colony has been resident since 2016 and apparently took up residence near an earlier clan that was forcibly evicted in 2016.

The “art” of bee relocation is an exercise in patience, tenacity and fearlessness. 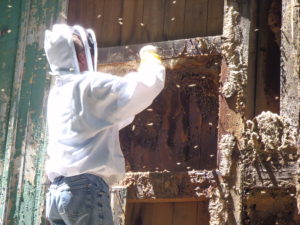 Honey bees being (forcibly) evicted from the barn

We planted 25 acres of canola in late April 2018 intending to harvest it in August and contract with a mill to have the seeds pressed into oil.  Everything was going to plan until early July when the a few undesirable weeds began poking their heads above the canola stand.  Before long, the weeds were crowding out the canola and the bright yellow canopy of canola blossoms gave way to a unruly crowd of unwelcome weeds.  There was still time to rescue the crop, but I wasn’t ready – the combine had spent much of the winter out-of sight and suffering from benign neglect  So when it came time to bring the thrashing monster to life, the beast would not respond.  By the time we got the combine up and running, the window for harvesting the canola had passed and we had a very mature but un-harvestable crop going to seed.

What Happened to Summer
September 2, 2019