New Life for an Old Barn

The Wright Bros. Farm Barn, listed on the National Registry of Historic Places for its Architectural Significance, is undergoing restoration and finding renewed purpose on the Gold Brook Farm

The National Historic Register of Historic Places record of the Ruben Gridley Wright Farm Complex (Ref. No. 83001659) cites a one and one-half story barn as a contributing structure to the historical significance of the farm.  The historic registry application, drafted by local historian Mari Runfola nominating the R. G. Wright Farm Complex, hardly captures the unique character and exceptional craftsmanship of the venerable landmark.  The Wright barn, like every purpose-built structure with an agricultural function, was an expression of the owner’s and builders’ ingenuity in its creation, and still is, an enduring history of the farming activities that thrived and evolved through the years.

It is regrettable that these remarkable old buildings are being surrendered to natural decay or demolished as an expedient to future development or farm modernization.  Even in our zest to restore the Wright farm complex to a useful purpose, we largely ignored the barn and deferred any substantive repair until restoration work on the main house and other buildings was substantially complete.  Only in the recent two years have we really begun to explore the condition of the structure and begin to understand it’s remarkable construction and history.  As we attempt to bring the building back from the brink of collapse, capturing both the unique character of this building and our efforts to restore its functionality has the makings of an interesting story.

Wright Bros. barn shows its age in 2016 prior to restoration work.

From a safe distance, the barn, as we confronted it in 2016, didn’t immediately elicit feelings of farming nostalgia or prideful ownership.  Rather, it appeared rather morbid, neglected and an embarrassing eyesore that screamed “sucker” when asked by friends wondering what drew us to the property.  By necessity, we immersed ourselves in rehabilitation and restoration of the house and consciously opted to defer work on the barn until the house was suitable for B&B guests.  Three

years passed and the tired bones of the aging barn continued to strain against the elements whilst we were otherwise occupied.  We opened the house to B&B guests in fall 2019 and soon thereafter started plotting rehabilitation of the barn along with a deliberate agenda for putting the land into productive farm use.  The COVID pandemic provided motivation to get started on barn projects owing to the forced reduction in social interaction and travel.  A few quiet afternoons poking around the foundation and structural framing resulted in a wake-up call of sorts and realization that continued neglect would be a fast track to the barn’s demise.  Time spent examining the barn revealed fascinating clues about its construction and use and provided deeper insights into the farming endeavors and operation of the farm as Ruben Wright originally intended it.  We were infused with another dose of motivation early in 2022 when Governor Houkel signed into law a barn restoration tax credit that fit neatly into our plans and offered substantial financial incentive to get the job done! 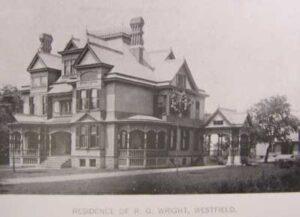 This early photo of the R. G. Wright estate shows the barn at far right.

The exact date of the barn’s construction has not revealed itself yet.  But based on early photographic records of the house and the construction materials and methods employed in its construction, it is likely the barn was built circa 1884 concurrent with construction of the house.  The layout of the building was typical of multi-purpose barns built at a time when mechanization was being introduced in all facets of field crop production and livestock management.  Surviving features such as hay mangers, grain bins, cow stanchions and hay pully tracks are clues to the variety of livestock and field crops produced by the original owners.

The basic footprint of the barn is an asymmetrical “T” shape; the South end of the building, facing Main St., is 54’ by 30’ and abuts a 40’ x 30’ wing that extends off the rear of the barn to the north.  The building frame is a post-and-beam construction connected with mortise and tenon joints held in place with treenails (wooden pins).  Main columns are 9 x 12” rough-hewed oak and the main beams are 9” x 8” solid oak timbers as well.

The main wing of the barn is configured in a typical English three-bay layout with swing beams dividing the three bays and allowing for a free span layout on the street level of the barn.  This is where carriages and other equipment was kept.  The lower (ground) level of the barn was excavated from the embankment that demarks the pre-ice age Lake Erie shoreline.  This bank or side-hill configuration allowed for horse-drawn wagons and other mobile equipment to access both the ground level and “street” level of the barn.  The ground level bank excavation extended over 12 feet below grade allowing for a clear span ceiling of 11 feet.  The immense effort of digging an exceptionally deep basement into the embankment provided amble clearance for even the largest work horses and fortuitously provided considerable flexible use of the space well into the age of modern tractors and machinery.

The doors are hung on “modern” tracks.  No evidence of earlier hinged barn doors has been found so it seems likely that the hung doors on both upper and lower levels are original features of the barn as is the hay fork track.  The ground-level equipment entrance was widened at some point, probably to accommodate tractors and larger equipment that eventually supplanted the original horsepower.

The gabled-roofed rafters are saw-cut members supported by hewed purlins held in place with hewed diagonal braces pinned to the main beams.  This configuration allows for a steel hay track rack that is still in place and appears to be part of the original barn construction.

A second level hay mow remains fully intact above the south (main) section of the barn.  A large, cantilevered bay window and hay loft door accent the south face of the barn and permit filling of the loft from either the south loft door or from the north end of the barn via the hay track.

The hay track extends the full length of the north-south axis of the barn allowing both the north and south wing lofts of the barn to be filled.  The hay track carrier rail extends beyond the north face of the barn through a large vertically tracked mow door that was apparently raised and lowered by horse drawn pulleys still in place on the north façade of the barn.  The roof peak extends about 5 feet beyond the north façade to provide structural support for the hay trolly and snatch forks used to unload wagons bringing lose hay in from the fields.   The trolly and hay fork pully blocks and halyards are still in place and operational.  A hay chute extends from the ground level stables and livestock pens up into the mow.  At some point early in the 20th century, a hay baler was introduced on the farm and a bale conveyor replaced the hay track and trolly fork system as a more efficient method of harvesting and storing hay.  Openings for the hay conveyor suggest hay production for feeding livestock continued well into the 20th century.

While Ruben Gridley Wright’s barn may be typical in its purpose for farms of its day, we’ve noted several unique features of the barn that provide substance to its unique architectural status and inclusion on the national historic register.  While 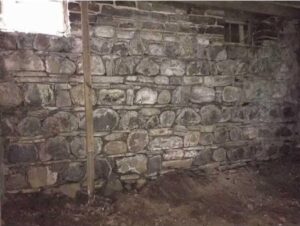 English bank barns with field stone foundations are relatively common construction on western NY farms from the 19th century, the R.G. Wright barn foundation is distinctive both for the overhead clearance achieve with the deep excavation into the ancient shoreline embankment as well as the stone workmanship evident in the construction.  Large split-faced field stones are layered with heavy creek bed shale stone to create a strong stone masonry lattice that has survived in remarkably good condition.  The meticulous foundation design and exceptional masonry workmanship is even more important in light of the deadweight design loads imposed on the foundation by the choice of slate as roofing material for the gabled roof.  At 800 lbs. per 100 square feet of surface, the roof is approximately 10 times heavier than a traditional asphalt or wood shake shingle roof.  Not only does the foundation have to carry the exceptional weight of the slate, but the entire barn structure was designed heavier and beefier as a result of the combined deadweight and live loads.

Perhaps the most unique feature of the barns is the interior stone and brick ramp leading from the street level to the basement level of the barn.  The ramp allows for horses to be moved from their

ground-level stalls to carriages and implements on the street level without having to exit the building.  This feature obviates exposure to the elements throughout Lake Erie’s notoriously inhospitable winters and greatly reduces environmental stress on the horses.  The ramp and basement floor are of brick construction to promote sure footedness in wet or icy conditions.  While the original farm horsepower is long gone, the stone ramp still provides a very functional and safe means of moving between levels of the barn. 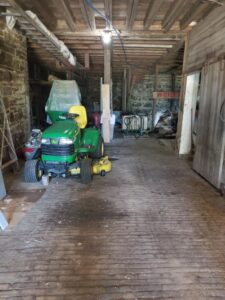 Numerous architectural features of the barn point to the affluence and high quality standards of the original owners; elements such as arched window sashes, bay windows, planned and milled siding, tongue-and-groove flooring and ornate trim work are uncommon features of barns of any era.   The use of premium materials and uncommon workmanship are undoubtedly factors that have contributed to the barn’s longevity.  Refurbishing and retaining these elements of the building are our active mission.  You can follow our progress on the blog section of this website or on our Facebook page.