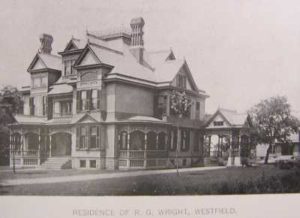 The R. G. Wright house was built in 1882-’84 in the Victorian style using wood and stone endogenous to the area.  Ruben G. Wright, son of Ruben Wright, gained local notoriety in 1849 by assembling a company of local adventurers and led the team on a quest for gold to the foothills of the Sierra Nevada mountains.  The team encountered challenges and hardships that would have destroyed less intrepid souls but they prevailed in their quest and were handsomely rewarded in the gold fields of northern California.  Ruben G. Wright profited handsomely in California initially working the gold fields then subsequently organized a business to supply fresh 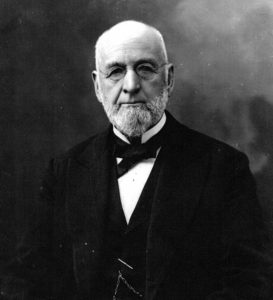 water to the city of Sacramento.  He spent five years in California before returning to Westfield to pursue ever-evolving interests in development and marketing of natural resources.  Mr. Wright achieved business success and leveraged his early gold mining profits through investment in timber lands and the production and sale of lumber.  With earnings from the harvesting of timber throughout the great lakes littoral, he commissioned construction of the Wright farmstead in 1882.