A Perspective from the Waist Gunner’s Perch 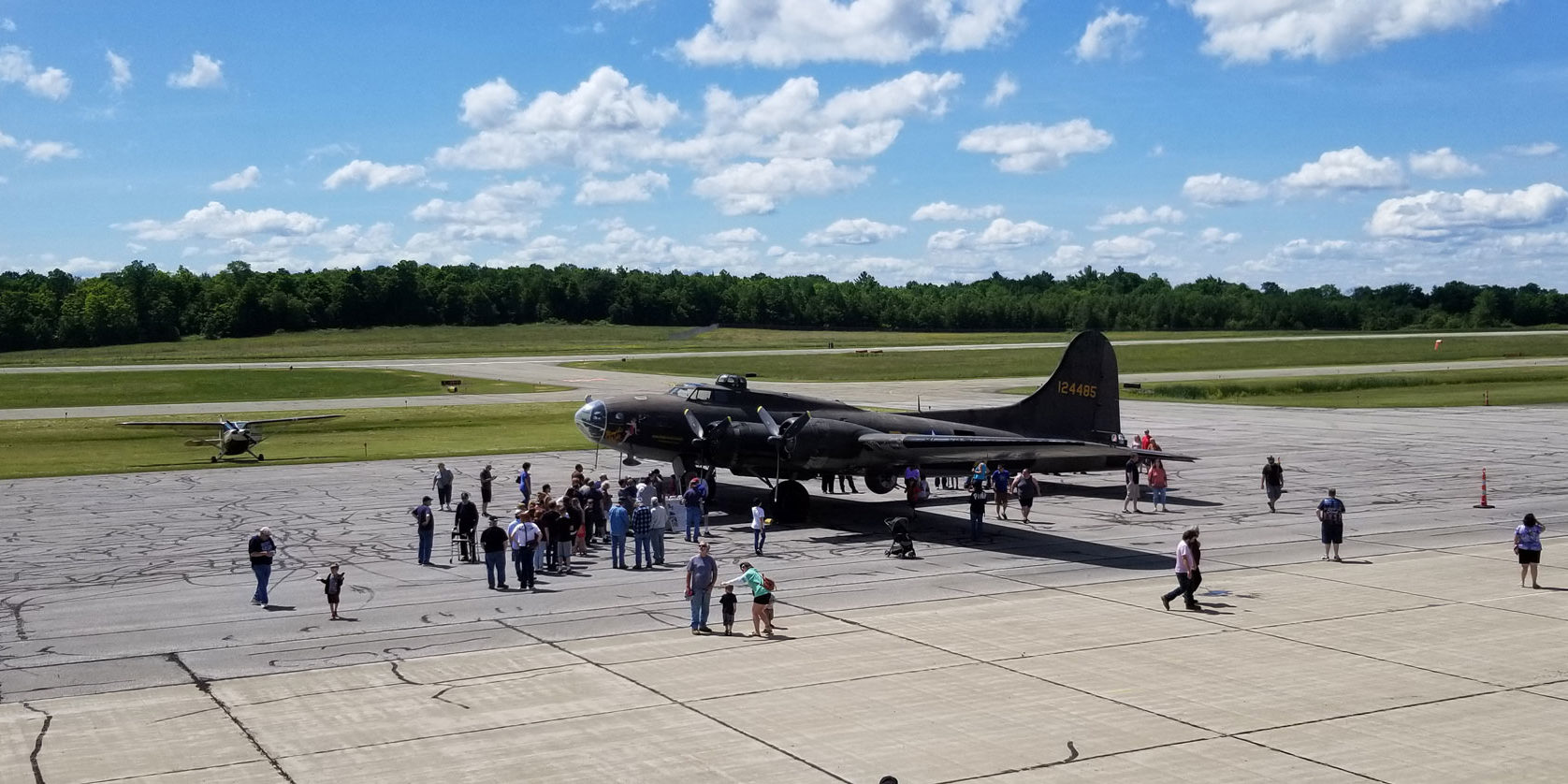 In addition to being “Chief Cook and Bottle Washer” for Gold Brook Farm’s bed & breakfast guests and chief tractor mechanic around the farm, I also have the privilege of managing the County’s two airports at Dunkirk and Jamestown.  Most days are spent juggling these many and varied duties and it can be rather stressful at times, but then there are those richly rewarding moments when the job is pure enjoyment and hardly seems like work at all.  Those are the moments we like to capture on the website and in our postings.  Over the past summer, Chautauqua County was honored to host visits by several historic WW II – era aircraft deployed by distinguished living history organizations.  The first deployment occurred in June 2019 when the National Warplane Museum in Geneseo, NY deployed their B-17 bomber; “Memphis Belle the Movie”.  The second flying history lesson was brought to the County’s Jamestown Airport by the Collings Foundation “Wings of Freedom” tour.  As the County’s Airports Manager, I played a small role in providing promotional and ground support for these fully restored and operational aircraft.  And in return for my modest contribution to the considerable effort required to pull together a public display of these aircraft, I was afforded an opportunity to fly aboard two amazing WW-II bombers.  In June I flew aboard the National Warplane Museum’s B-17 manning the waist gunner’s position and when the “Wings of Freedom” tour came to town, I had the opportunity to fly in their B-25 Mitchell

bomber.  Both flights were equally remarkable but uniquely different experiences.  Nothing about flying aboard a venerable old bomber compares to any other type of aircraft I’ve ever flown aboard.  The raw power of those large radial engines and the exposure to the wind stream blasting through the open gunner’s portals is unique to that era and those purpose-built “flying fortresses”. 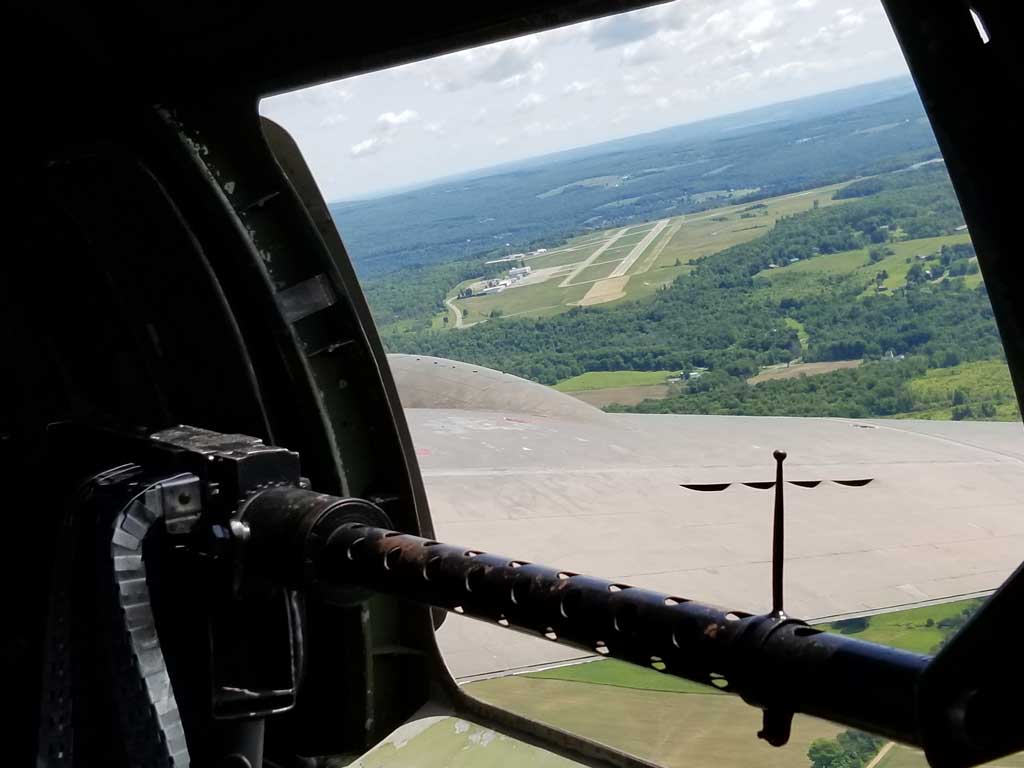 The nostalgia and pride that these relics of America’s industrial preeminence from the last century conjure is further heightened by the first-person narrative that surviving war veterans and factory workers bring to these living history events.  Unfortunately, all of these manifestations of our “arsenal of democracy” history are growing scarce with the passage of time.  The veteran air crews and war-generation factory works are passing from our midst and the aircraft and the means to maintain these rarefied machines are disappearing with similar inevitability.  Indeed, one of the aircraft from the Collings Foundation “Wings of Freedom” tour, a B-17 Flying Fortress, was lost in a crash landing at the Bradley International Airport in Connecticut on October 2, 2019 with the loss of 13 lives (see link to media coverage below).

Certainly, no aviation professional views any crash as “inevitable” and great care is taken by all involved to ensure that these vintage aircraft are fully airworthy and crewed by the most capable aviators.  None-the-less, time takes its toll on men and machines and, with time, the memories of those who made the profound sacrifices, in building, maintaining and flying combat missions, along with the remarkable machines they produced, are disappearing.

So, at the ripe old age of 60, I consider it my great privilege to have sortied on a mission over Chautauqua Lake aboard two remarkable flying artifacts of “The Greatest Generation”. 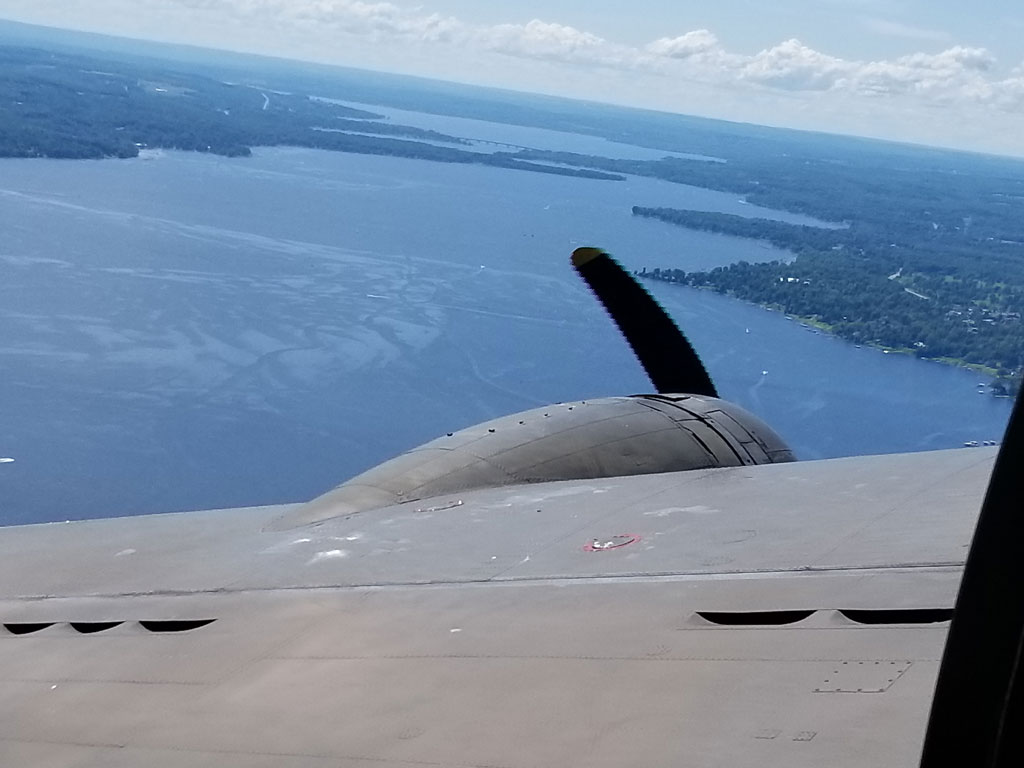